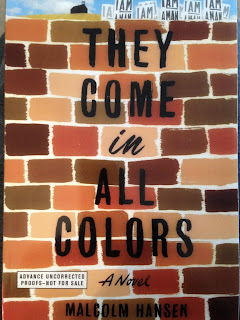 I had the privilege of attending my first Public Library Association annual conference this past March. One of the sessions I attended was a panel with three debut authors, including Malcolm Hansen. While he was giving his talk, I thought he was so articulate, interesting, and inspiring that I would absolutely have to read his book and I hoped I would love it. I had him sign the ARC I got at PLA and had about 30 seconds to chat with him while he did. His book, They Come in All Colors, will be out May 29. So you don't have to wait much longer!

Luckily, I did love the book and was blown away by Malcolm's writing. The story is an important one, especially in our modern age where we find ourselves still struggling against the ugliness of racism. I hope the book will be widely read and discussed. Some books have the power to change the lives of others. I think Malcolm has written a book like that. I know he did an awesome job writing it. I mean that in the true spirit of the word, not as slang. As in, I was in awe of the way he told the story. I kept thinking to myself, this is his debut? This man was meant to be a writer. Without further ado, I am so pleased to introduce you to Malcolm Hansen!

RW: They Come In All Colors is a beautifully written book about an 8 year old biracial boy, Huey, growing up in the deep south in the early 1960s. It's a complex and powerful novel with many different threads running throughout that you handle like an expert. What was the first seed of this story for you? A feeling? A character?
MH: ﻿There was more than one seed for the story. Part of it was, of course, Huey and his family; but another part was the specifics of the time and the place. I wanted a semi-dated look at the psyche of someone who doesn't know it but is on the cusp of learning something of great importance about himself. With respect to the time and the place, I grew up with stories about my father's experiences as a freedom rider in small, obscure southern towns. I think I really latched onto those stories, for me they felt like war stories. The stories were colorful and provided a cast of characters that I could feed experiences to and have interesting things happen. So I just put those two things together.


RW: It feels like this novel was meticulously plotted. Did you outline or mostly fly by the seat of your pants?
MH: I definitely flew by the seat of my pants. Much of it felt like I was writing in the dark, groping my way forward with only a vague idea for how it was supposed to all come together at the end.


RW: You decided to forgo dialogue markers in this narrative. I feel it worked very well. Why/how did you decide to go without them?
MH: That was Todd's suggestion; what an amazing editor he is. He was bold and willing to do something a little radical and in a way that ultimately felt so right for this novel. He just didn't feel like we needed them. Looking at the novel now, I think, that was brilliant.


RW: Huey's voice is amazingly pure. He witnesses a violent and contentious period in his hometown, but his thoughts stay true to that of a child. Was it difficult to write him as a character without the baggage and knowledge of adulthood? Did you ever slip and have to remove passages?
MH: Yes. That part was very difficult for me and you could say that I ultimately had to figure it out the hard way. The question of narrative distance and the right choice there loomed large over the manuscript from the very beginning. It was something that I knew I had to get right, but wasn't at all sure how. So I had to do a lot of experimenting. I tried Huey as an adult looking back, I tried Huey as a five-year-old, and I tried practically everything in between. Having experimented with Huey and tweaked him in countless ways, I eventually settled in on a sweet spot. By that point, I had gotten pretty good at pruning unnecessary "grown up" reflection and Huey the boy jumped from the page.


RW: How long did it take you to complete the first draft?
MH: About five years.


RW: The book tackles a difficult subject that evokes strong emotions. What do you hope readers will take from Huey's story?
MH: I'm trying not to have any expectations or preferences for that, and just remain open. I think I'd drive myself crazy if I tried to somehow control that.


RW: Writers are often advised to "write everyday" "write what you know" and "write a book that scares you." Do any or all of these adages apply to They Come in All Colors?
MH: For sure. Especially when the story was rumbling in my belly. It was imperative, especially in a story as potentially divisive as this, that I stuck with what I knew.


RW: Personally, I prefer to have music playing while I write and I put together special playlists for each of my books. Do you write with music? If so, what are the top songs you listened to while writing this book? If not, what is your ideal writing situation?
MH: Definitely not. I need quiet; not absolute, but enough to support sustained concentration. Quiet somehow helps me to visualize scenes and characters more clearly.


RW: What was most difficult about writing this book?
MH: Huey's voice. I definitely had the story before I had figured out the voice for the story.


RW: What was easiest about writing this book?
MH: I think I struggled with pretty much everything.


RW: Who are some of the authors that inspire you and your writing?
MH: I'm a big Henry Miller fan. William Burroughs and Hunter Thompson, too. Old wrinkly white men who did lots of drugs and fucked everything. Strung out, junkie, half-failures. I'm not necessarily proud of it, but that's what I like to read. I have a soft spot for the transgressive stuff. Of all the things I connect with in good writing, that's what I connect with the most.


RW: I hate to ask this one because the book isn't even released yet, but what are you doing now? Focusing on marketing and enjoying the ride until release, or is your next book already taking shape?
MH: I'd say a little bit of both. Somehow I really hadn't convinced myself that my job was done until I actually held a copy of the hardcover in my hand, and now that I'm at that point I feel like I need to take a few breaths before pivoting to my next project.


Thank you so much, Malcolm, for letting me interview. Congratulations and wishing you great success with the release of They Come in All Colors!