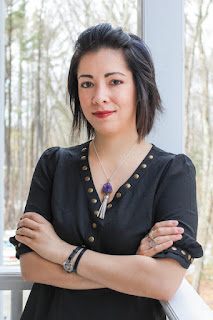 I am so happy to introduce you to the incredible J.E. Klimov! J.E. has an exciting new novel out now, The Aeonians. I hope you'll enjoy this interview as much as I did and that you'll check out The Aeonians!

RW: Do you write with music or do you require silence? If yes to music, what was on your playlist for The Aeonians?

J.E.: I always listen to music when writing, although it's different than music I generally enjoy. When I write, it's usually soundtracks (e.g. The Gladiator, Memoirs of a Geisha) to movies or video games (e.g. Breath of the Wild)- strong, powerful symphonies. Admittedly, I listened only to Legend of Zelda music by Koji Kondo when I wrote "The Aeonians" because the storyline behind the franchise was a primary source of inspiration. There are a lot of orchestrated versions on Youtube that are incredibly inspiring too!

RW: How long did it take you from first draft to fully proofed manuscript?

J.E.: "The Aeonians" is an exception. I started my first draft in 7th grade, which is greater than 10 years ago. To be official, I'd say 2014 and fully proofed by 2017. It took a long time because it required extensive editing and restructuring because I've sat on the plot for too long. My sequel, "The Shadow Warrior", which will be out fall 2018, only took me one year. Major difference!

RW: What books and authors inspire you most?

J.E.: From an inspiration standpoint, I would say a handful of my independent writers. I wasn't much of a reader until the last few years. Let's see, I admire Amanda Lovelace, author of "The Princess Saves Herself in This One"- a collection of poetry. "The Only Gold" by Ethan Luke is also high on my list. These two authors write in genres that I typically don't read but singlehandedly convinced me that I can love poetry and that I can love historical fiction. I strive to have that kind of writing power.

RW: What about The Aeonians are you most proud of?

J.E.: I'm most proud of publishing my first story. I refused to scrap it no matter how bad it was, and now, it consists of a world that I cherish and paves roads for many sequels.

RW: Did you encounter any big surprises while writing the book?

J.E.: There were always surprises, some good, some bad. Example of bad: I discovered a never-ending list of plot holes in my first edit. Example of good: I ended up favoring my antagonist over my protagonist. How is this good? Well, he became the most fleshed out character and *spoiler alert* becomes the cornerstone to "The Shadow Warrior". "The Aeonians" was initially meant to be a stand alone novel!

RW: World-building can be intimidating. How did you tackle? Did it come to you almost fully formed or did you have to spend a lot of time working on that before you started writing?

J.E.: "The Aeonian's" world came naturally to me: I had an overactive imagination as a teenager. Instead of using trolls, dragons, elves etc (disclaimer: nothing wrong with those. I love dragons!), I enjoyed creating new species and carving out the landscape of my own country. My approach to world building was focus on the small things, the specifics, and then plug them together like a puzzle until it becomes one big picture.

RW: Are you working on a new book now? Can you tell us anything about it?

J.E.: Yes! I'm currently working on two projects: "Ultimate Seven"- the tentative title to the final installment of the Aeonians trilogy which is proving to be an emotional challenge. I also am working on a short story for another Just-Us-League Anthology. I've written with this group before and published three short stories with them so far. The theme this time around is paranormal/urban fantasy. More about the JLA: http://jlwriters.com

RW: When you aren't writing, what are some of your favorite things to do?

J.E.: My life is very...full; however, if I can scrape up any extra time, I like to run, play video games (in moderation, and only Legend of Zelda), watch The Office, and draw. Drawing/sketching was my first love, and someday I hope to publish a graphic novel. I always wanted to express my story telling through pictures and feel that this medium doesn't have to always been geared toward kids.

Thank you so much for agreeing to this interview! Based on your answers, I feel like we should absolutely be best friends. 😃 Congratulations on the birth of your first book and best of luck getting through the rest of the series. It's no small feat to get any book into final finished form. You rock!
Posted by Sarah at 6:56 PM